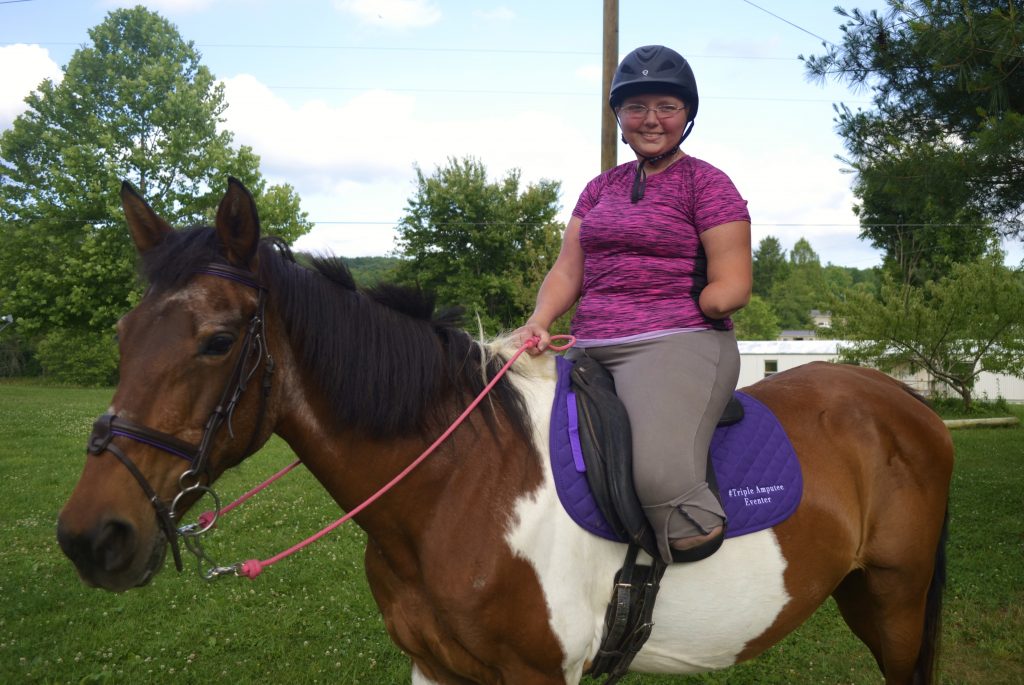 What first introduced you to your love of animals?
My mother had a big part in my love for animals. I think animals, especially horses, were in my blood since I was born; my mom just solidified it.

Tell us a little about your horses, what are they like?
Albert is my Thoroughbred gelding who finally helped me to achieve my dreams of showing!  He’s a great jumper and is so clever and clean over the jumps. He’s absolutely silly though. I often call him Albertasaurus, ha-ha!

Sugar is my beautiful Paint Spotted Saddle Horse mare who was a rescue as she was left to die in a field after she was no longer useful as a broodmare. She couldn’t walk due to founder and a hoof abscess. I’ve had her since November, 2009. I am very proud of her as she was a completely blank slate when I found her so everything she knows I trained her to do, and that feels amazing.  Even more so now that she is the horse I ride exclusively.

The minis are a hoot- and- a- half! Two of them are broke to drive, and it is so enjoyable just driving them down the road!

Can you give us a summary of your diagnosis and how you ended up having your legs and one arm amputated?
I had many misdiagnoses before being diagnosed finally with Polyarteritis Nodosa.  I was very sick for a long time; I had no energy, and often I would nearly fall down trying to get to the bathroom. While I was still working I had quite a few people, even a coworker, who didn’t believe I was sick and just thought I was feeling sorry for myself, and just faking it. Because my diagnosis was so difficult to discover, my sickness led to 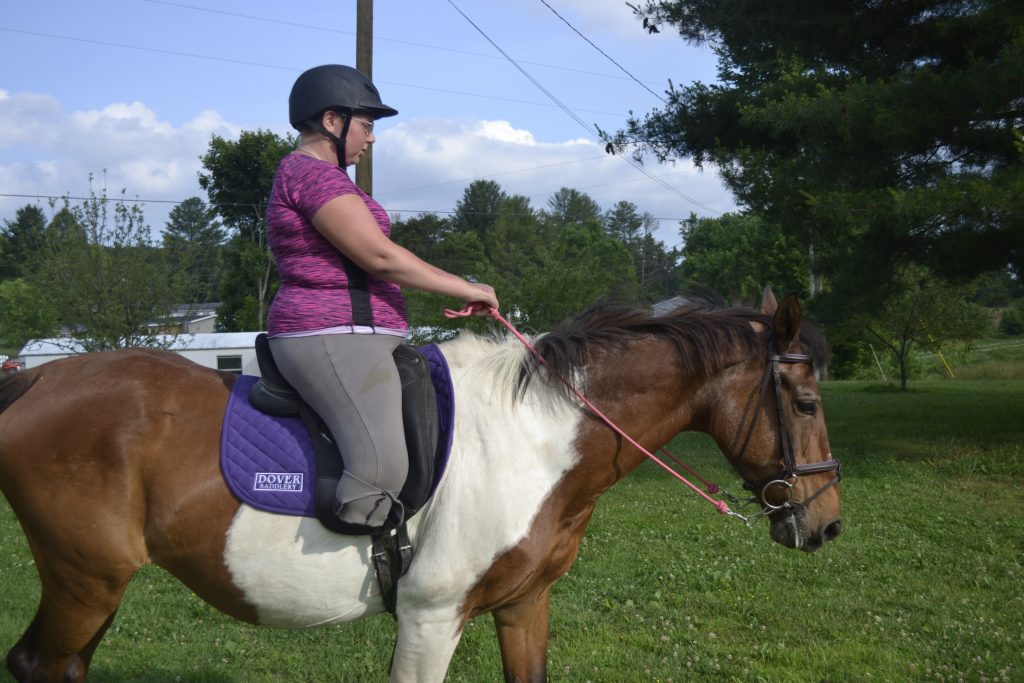 my limbs dying because my blood vessels were being cut off. A lesion on my hip is how I was diagnosed, but unfortunately it was too late to save three out of four limbs. My right hand was severely damaged as well, but salvageable. I have neuropathy, so I cannot feel anything in my hand, not even pain. I’ve accidentally burned my thumb twice and often scrape my hand with grooming tools. I also have tight tendons and ligaments so I can’t really open my hand, or give a thumbs up! Surgery is hopefully in the future for my hand.

Can you describe the transition period after you were released from the hospital and able to go home?
Honestly, it was really strange to go home. Hospitals always have something happening, sounds all the time. I was there from December 3rd to April 5th –that’s a long time. Of course as soon as I got home I went to see my horses. Sugar was the first to come see me, and I just cried and cried. Being able to smell that horse smell and touch her for the first time in months was just magical.

What were the hardest aspects for you to deal with mentally and physically from the time you were diagnosed until now?
The hardest thing for me has been letting people help me. Before this I was a very independent person, I was working and riding and could do anything I wanted at any time. Now I have to rely on family or my fiancé just to use the bathroom or get dressed.

How does getting back into the saddle and being able to start riding your horse make you feel?
Riding Sugar has really helped me to realize that I can get through this, and I can get through anything life throws at me.

Do you have any advice or words of wisdom for someone else that might be going through a similar situation?
The pain you’re feeling now will fade. Get back to doing what you enjoyed prior to your injury, and that will help you heal mentally.

What are your goals for your future riding career; have they changed from when you first began riding?
I still want to event! The general concept has changed, but I’m still determined to tackle a cross country course when I get my prosthetic legs!

1 thought on “In the Saddle with Jessica Thoma: #TripleAmputeeEventer”